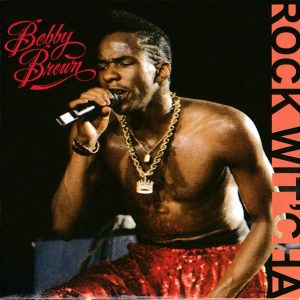 This tune randomly popped up on my phone while out walking this morning. I’ve always thought “Rock Wit’cha” was Bobby Brown’s finest effort. Sadly, it took FOREVER for MCA Records to release it as a single.

On December 16, 1988, I arrived in Bend, Oregon as the newest employee of Q94 KXIQ Radio. In addition to holding down afternoon drive, I was also the station’s music director. Bobby’s “My Prerogative” was climbing the record charts on it’s way to #1. A few months later, as that song was getting ready to drop off the Top 40, I surmised “Rock Wit’cha” would be the next single. After “Don’t Be Cruel” and “My Prerogative”, it would stand to reason a slower song would be released next. I added it to Q94’s playlist and began playing it off the album.

Wrong times two. Next came “Every Little Step.” What the h-e-double toothpicks is going on here? “Every Little Step” also made it to #3, but again, “Rock Wit’cha” was a better record! MCA HAD to release it next. But this was not to be. Just as “Every Little Step” was peaking, out came “On Our Own” from the Ghostbusters II soundtrack. I can’t win this game!

After “On Our Own”, I figured MCA was done releasing singles from Bobby Brown’s “Don’t Be Cruel” album. He had scored four Top 10 hits, a mighty impressive feat for an artist who had not achieved superstar status. About this time, I learned our radio station had been sold. After doing my research on the new owners-to-be, I decided to leave KXIQ. I did not add “Rock Wit’cha” for a third time. I had resigned myself to the fact that it would never be released as a single. And that was that.

A few months later while I was driving around Fort Dodge, Iowa, guess which song came on the radio? Who was playing this? Was it 88.1 KICB, the college station which would play anything? No. Was it Z94 KKEZ whose format was all over the road at the time? Nope. It was Q102 Des Moines! KRNQ was a Contemporary HIT Radio station in the truest sense of the word. They did not play album cuts. If Q102 was playing “Rock Wit’cha”, MCA must have released it as a single!

Sure enough. “Rock Wit’cha” was released as the FIFTH single from “Don’t Be Cruel.” It ended up reaching an impressive #7 on Billboard’s Hot 100. There’s no doubt in my mind that had it been released after “My Prerogative”, it would have been a #1 record. “Rock Wit’cha” was Bobby Brown’s best song.