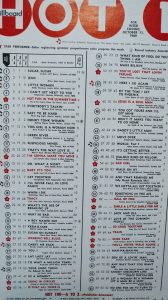 50 years ago today, one of the first records I ever bought was the #1 song in America. It would go on to hold the top spot for 4 weeks and become #1 for the entire year of 1969. Very impressive, especially considering the Archies weren’t even a real group. They were created by music publisher Don Kirshner. In addition to singing hit records, the Archies also hosted a Saturday morning cartoon on CBS.

Did you have the “real” 45, or did you cheat and cut it out from the back of a cereal box? In 1969-70, various Archies songs were pressed onto Post Alpha-Bits and Super Sugar Crisp boxes. I don’t remember “Sugar Sugar” being one of them, but others have told me that it was.

BTW, parents were not big fans of those cereal box records. Here’s why: kid would pester Mom to buy the cereal. As soon as she did, kid would cut the record out. Cereal was dumped into a bowl, soon becoming stale and then thorown out. Soon to be replaced with a new box of cereal.

What a GENIUS marketing ploy!

Here is the original pressing of “Sugar Sugar” on Calendar records. Just as it sounded 50 years ago: