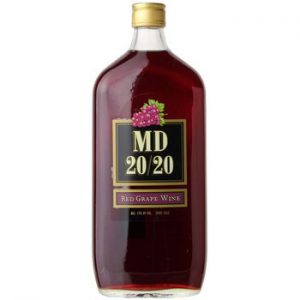 A friend recently posted this photo on Facebook and asked us to share our memories of the product. Oh, man! Where do I start?

Officially, the “MD” stands for Mogen David, the company which produces this wine. But we all knew it as “MAD DOG” because that’s how you acted after downing a few swigs of this potent vino. The next day, you would likely feel sick as a dog, but that’s a whole ‘nother story for another time!

MD 20/20 had two things going for it: high alcohol content and low price. Checking around online, I see the alcohol content is listed as 13%. I seem to remember it being somewhere around 20% (wasn’t that what the “20” in the name stood for?), so it’s punch must have been weakened at some point.

I first became familiar with Mad Dog at the tender age of 20 while working at a radio station in southern Minnesota, playing polka records for a living. Not exactly the format-of-choice for most 20-year-old males, myself included. For performing this task 6 days a week, I was paid the princely sum of $750.00 per month. If I remember correctly, that worked out to about $145 per week after taxes were taken out. Five hours of polka-playing for paltry pay necessitated a nightly stop at the liquor store on the way home from work. Now before you purists start accusing me of underage consumption, this was 1984. Legal drinking age in Minnesota was 19 at the time.

In those days, a bottle of MD 20/20 could be had for around $2. The taste left a lot to be desired, but it got the job done. “Best bang for the buck”, we called it. Of course, the day after was another story. This is where being just 20 years of age with an underdeveloped brain becomes an advantage. You have a short recovery time and feel just fine by about noon the next day. If I tried this now, I’d be out of commission for at least a week! Fortunately, my brain is now fully developed. I know better.

Other “bum wines” that I experimented with included Night Train Express and Richard’s Wild Irish Rose. I never got into Cisco or Thunderbird. Which I’m certain was a good thing.

Fortunately, both the job and my bum wine phase only lasted for a few months. I got lucky and was hired by a rock station in Kansas to be their new night jock. That meant I didn’t need the Mad Dog 20/20 anymore. However, I soon learned that Kansas had an amazingly archaic set of liquor laws. You had to have a “private club card” to drink in bar. You also had to be 21. Unless they only sold beer. In that case, you didn’t need a card and you only had to be 18. You see, 3.2 beer wasn’t considered alcohol in Kansas. It was officially known as “Cereal Malt Beverage” or CMB. Fooled me because it sure affected me like alcohol after I had drank a few of them! I could write a whole chapter on Kansas liquor laws and probably will at some other time.