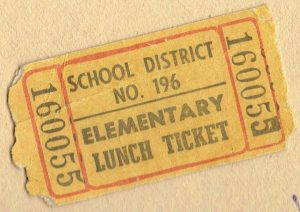 Growing up in Minnesota, Labor Day meant the unofficial end of summer. It was also our last gasp of freedom, since a new school year began on the following day. There were a few times when school started the last week in August. But for the most part, the first day of school was the day after Labor Day.

On Tuesday, September 3, 1974, I found myself anxiously walking down the fifth grade hall at Westview Elementary School. In those days, you had to wait until the first day of class to find out who your teacher was. We’d walk by each door and read the list until we found our name. I was especially nervous because I was afraid I would get Mr. Hipple.

Mr. Jim Hipple was a great man who taught 5th grade at Westview for decades. But he was also known to be a strict disciplinarian when necessary. You see, Mr. Hipple was also in charge of the school patrols. This meant I had already had a few encounters with him, due to my penchant for goofing off on the bus and not obeying the patrols. Rumor had it that the “problem kids” were assigned to Mr. Hipple so that he could straighten them out before they hit Valley Middle School the following year.

I walked up to Mr. Hipple’s door, not daring to look at the class list. But I had to. This was it: the moment of truth. I forced my eyes to read just one line at a time: A…B…C…D…DU..

I walked back down the hall and stopped the last remaining door: Room 205, up one from Mrs. Newstrom’s class. There I was! Mrs. Ruth Keely was my 5th grade teacher. This proved to be a great match. “Mrs. K” became my favorite teacher at Westview. She was the first and only one there who really understood me. We’re still friends to this day. Sometimes, even the problem kids get lucky!

One thought on “The First Day of School: 5th Grade at Westview”