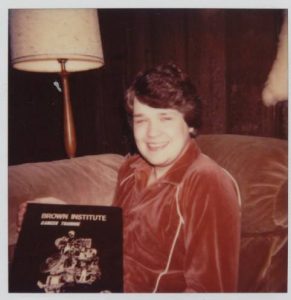 It was 39 years ago today that I began my journey towards becoming a professional radio broadcaster at Brown Institute in Minneapolis, Minnesota. Also known affectionately as “the voice factory of the Midwest”, this is where us kids who were too lazy to go to college and too scared to steal would go for our post-secondary education.

On the first day, we all gathered together in a large room. This was known as the “classroom” portion of our training. Mr. Mike Soucheray was our instructor. We were each given an official Brown Institute binder which contained the school rules, procedures, several vocabulary word lists, and three blank 30-minute cassette tapes.

Did I mention vocabulary words? Oh yeah. We had to practice those every week. The lists consisted of words which were difficult to pronounce and define. We were told that we’d need to use these at some point in our careers. Words like “ostracized” and “gregarious.” During my 16 years behind-the-mic, the total number of Brown vocabulary list words I found a need for was zero.

We were then split into 5 much smaller studio classes. Mine was 9AB1. 9 = the month class began. AB = Afternoon Broadcasting since Brown also offered computer and electronics courses, with both morning and afternoon classes available. 1 = studio class designation (1 of 5.) This was where we received actual hands-on training, using equipment similar to what would be found at an entry-level radio station. Back in those days, that meant cueing records, playing commercials off of carts, and backtiming into network news. Learning how to be a real, live radio disc-jockey. This was what I had wanted to do since I was 4 years old. I loved it!

When we weren’t in class, and sometimes when we were supposed to be in class, we could be found at The Poodle Club: a dive bar on East Lake Street. It also happened to be the closest bar to Brown Institute. Their clientele was a strange and eclectic mix of Brown students, old bums, and regulars from the neighborhood. “The Poodle” was close, cheap, and they never asked me for ID. Which was a good thing because I was underage for most of the school year. Being the baby of my class, I didn’t turn 19 (legal drinking age in Minnesota at the time) until late May. The Poodle didn’t care. They had free sandwiches and/or hot dogs during happy hour and Special Export on sale every morning before noon. Worked for me!

Unfortunately, Brown Institute is no more. After transitioning to Brown College and finally Sanford-Brown College, it closed for good in 2017. Why? There just isn’t much of a demand for live air talent anymore. Most of what passes for radio today is prerecorded and run off of computers. One staff typically does duty for 4, 5, or more stations in a cluster. The broadcasting industry has changed immensely since 1982. Sadly, Brown is no longer part of it.