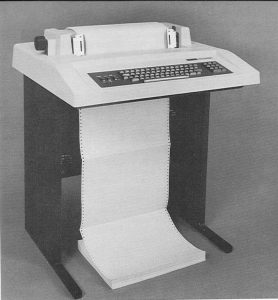 Did you have a computer room at your high school? At AVHS, we had 8 Decwriter floor console terminals which connected to the state of Minnesota educational mainframe computer in St. Paul. Each had a regular dial telephone next to it. You would call 636-4736 and wait for the tone. When you heard it, you’d hurry and place the phone receiver into the rubber cups on the modem before the connection cut off. Extremely primitive by today’s standards, but cutting edge technology back in 1979!

This system was known as TIES. I believe TIES stood for Total Information Educational Systems.

You then had to log in with your school’s unique ID and password. Apple Valley’s login was HEL-I201,VERY,3. “VERY” was the password, so you had to press the control key down while you typed it in. “3” designated that your school had the very latest modem, allowing you to cruise TIES at a blazing 1200BPS instead of the standard 300BPS!

If you were successful at establishing a conncection and logging in, you could play simple games like Oregon Trail. You could learn programming by writing basic programs. You could do your math assignments. Or, you could talk trash about other people. A high-tech version of the bathroom wall. You would then put the person’s name on it and save as a “program” so they would find it. Of course, I chose the latter. It was great fun until someone narked. Then, Corby Smith (the computer teacher) would find you and suspend your computer room privileges.

A bunch of us computer geeks also owned CB base stations. We constantly competed to see who had the biggest antenna, loudest radio, and most powerful signal. Poor April lost a “power war” with me and was subsequently ridiculed the following day: 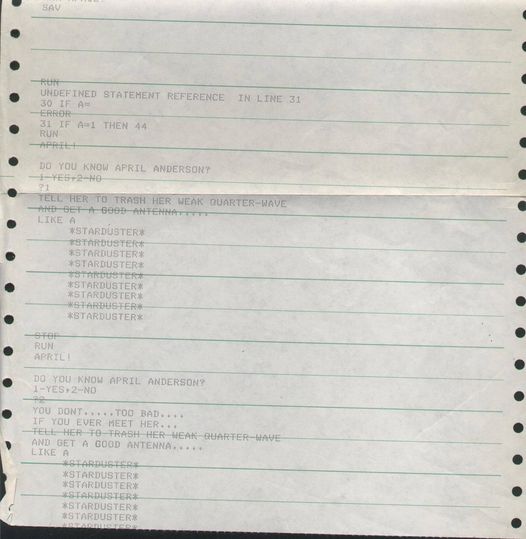 Interestingly enough, the telephone used to connect to the mainframe was just a plain old 1970s desk dial phone. Each phone had a separate line, unique number, and was not part of the school’s master phone system. Because of this, an enterprising young prankster could have some fun!

Because we were computer and electronics geeks, we knew that if we dialed “511”, an automated voice would tell you the number you were calling from. In addition to the 8 phones in the computer room, there was also one terminal and phone in the library. Because of the open architecture which AVHS employed, you could walk out of the computer room and see the entire library one floor below. Of course, everyone must be QUIET when in the library.

If the library computer was not in use and you called the phone, it would ring. These were genuine Bell phones with LOUD ringers! Since nobody was near the phone, it would ring until the Ms. Sukovich (the librarian) got up and walked over to answer it. It was loud enough to hear inside the computer room. If you got up and walked over to the railing, you could watch the whole thing!

The same prank could be performed in reverse. If there was a class in the computer room, call from the library and disrupt it by making all the phones ring in sequence.

I know it sounds dopey now, but this was great fun and endless enjoyment for 15 year-old boys!