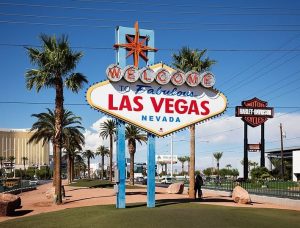 I was in Las Vegas, having just awoken at the Stratosphere. Also known as the tallest building in Las Vegas. I always go to my computer to get the first news of the day. Today, for some strange reason, I turned on the TV instead. They kept playing this clip of a plane hitting one of the World Trade Center towers. I thought it was a promotion for some new horror movie or TV show. A few minutes later, the second tower was hit. I could immediately tell by the reaction of the newscasters that it was no joke.

Quickly taking note of my situation, I decided the smart thing to do would be to go for my morning walk and thus get out of the building. When I walked through the casino on my way to the front door, it was surreal. None of the hundreds or possibly thousands of people in that casino had any idea what had happened. They were gambling as per normal for a Tuesday morning in September. Later that afternoon, the casino was indeed showing live news coverage on about half of the monitor screens. The other screens continued to show Keno numbers and the casino was still full of gamblers. People now KNEW what had happened and they were continuing to drink and gamble as if nothing important had taken place just a few hours ago. Disturbing.

I was scheduled to fly out on Thursday, September 13. But since all U.S. airports were now closed, that was impossible. I had purchased this trip as a package, so my room rate was pretty cheap. When I asked to stay until the airports opened, the hotel assured me it was no problem. But they wouldn’t extend the rate. I’m like “Why not? Nobody else is going to book that room until the airport opens!” They thought I’d just pay the regular rate because I needed some place to stay and didn’t have a choice. Wrong. I checked out, rented an in-town car for cheap from Enterprise, and found a room for about half the price on Boulder Highway. I ended up staying there until Saturday morning when I could get a car from Avis to drive out of state.

When I went to the airport to switch cars, another surreal experience awaited me. One of the largest rental car lots in the world is located at Las Vegas’ McCarran International Airport. On any given day, you will find literally thousands of cars available there. Today, that lot was completely empty! As I rounded the corner, I saw one lone car at the end of the lot: a red Pontiac Grand Am. Because I had to return the other car to Enterprise, I told the attendant “I’ll be back as soon as I can. Don’t let anyone take that car!” I grabbed the keys, transferred my stuff, dropped off the other car, walked back, got in, and got the heck out of there! About 16 hours later, I arrived at my friend Lisa’s house in Culver, Oregon. A long, desolate drive through the desert which makes for a great story all by itself.