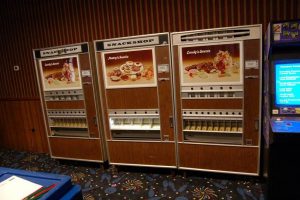 Did you have candy machine(s) at your high school? We did at AVHS, but they were either out-of-order or empty much of the time. For ambitious students, however, there was a workaround solution. Our study halls were held in the cafeteria. Attached to the cafeteria was an ice arena which was used by student skaters and hockey players. The ice arena candy machines were stocked and operating at least 90% of the time. We were not allowed to leave during study hall, but since when has that stopped teenagers?

Standard procedure was to hang around the pop machine on the left and look out of the corner of your eye to see if you were being watched by a teacher. If not, do a quick “around the corner”, down the hall, and out the door. Upon return, repeat in reverse order so you don’t get caught sneaking back into study hall!

I quickly noticed that some teachers cared about enforcing attendance more than others. Mr. Oistad either didn’t notice you leaving or didn’t care. But Mr. McCreedy was damn near impossible to slip past! He’d play you like a cat plays with a mouse, letting you walk all the way down the hall until you got your hand on the door handle. Then you’d hear “Excuse me! Excuse me!” That drove me NUTS!