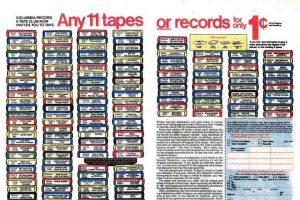 How many of us were once (or many times) members of Columbia House Record & Tape Club? For those too young to have been part of this pre-mp.3 musical miracle, you could get 11 records or tapes for just a penny plus the small print. The small print was “plus shipping and handling” which if I remember correctly came to $1.85 on the introductory shipment. Still not a bad deal for 11 albums! Of course, the catch was that you were required to buy 8 more “at regular club prices” within the next 3 years. Which was full list price “plus shipping and handling.” About $10.50 for an 898 series release which could be found on sale locally for $5.99. Still, if you calculated it all out, you were getting 19 albums for around $4.50 each. That beat the stores even on their best sale days.

The ultimate thrill was receiving your introductory shipment in the mail. You’d tear the postage-paid card out of the magazine, fill it out, put it in the box, and then wait…wait…wait…

When the magic day finally arrived, it was was like Christmas! You’d come home from school and Mom would say “You got mail today!” And there it was: right there, on the kitchen table, in all it’s glory! That beautiful brown box which contained not just 1, not just 2, but ELEVEN brand new albums!

Do you remember what was in your introductory shipment? I do!

(Yes, I was a huge KISS fan. I was also a closet Manilow fan!)

The toughest part was deciding which one to play first. Should I open them all at once and have a record-playing marathon? Or should I open one per day, giving me a new album every day for the next week and a half? (I chose the latter.)

Remember the order cards that you had to send in each month? “S” was for record. “X” was for 8-track tape. “C” was cassette tape. “T” was reel-to-reel tape. Not all albums were available on open reels, but several titles were. Later, when reels were discontinued, “T” became the designation for compact discs.

I had a “friend” (actually a CB acquaintance) who signed up multiple times with various addresses. Of course, he never honored his agreement to buy 8 more records within the next 3 years. He proudly said “They can’t do anything to me. I’m under 18, so they can’t hold me to a contract. They can’t mess up my credit because they don’t have my Social Security number.”

The kicker? His father was a lawyer.

In a world filled with instant .mp3 downloads (legal and otherwise), kids will never know the sheer ecstasy of opening that package from 1400 North Fruitridge Avenue in Terre Haute, Indiana!