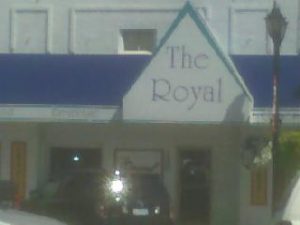 Here I am, live from Main Street in Park Rapids, Minnesota! Before heading out to Whippoorwill Resort for the week, I had to stop at the Royal Bar. Park Rapids had been home to two famous landmark establishments: Wimpy’s Hamburgers and the Royal Bar. Sadly, Wimpy’s closed for good a few years ago. But the Royal is still going strong. Besides serving great drinks, it is believed by many that the best hamburgers in Park Rapids are found inside this building. Today, they did not disappoint!

Other fun Park Rapids area establishments from days past by include Club 34 aka The Stockade, and Chateau Paulette. Club 34 is long gone. Chateau Paulette (or just “Paulette’s) is now Zorbaz. Both could get pretty rowdy at times. My Dad still tells me a story about the time the Hubbard County sheriff showed up at Paulette’s to break up a fight between a group of lumberjacks. The sheriff got beat up and an ambulance was called!