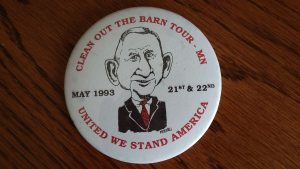 I voted for him both times: 1992 and 1996. And yes, I had the bumper sticker to prove it. I’ve promised not to get political on my site, so I’ll just say that I voted for H. Ross Perot because I felt he was the best candidate for the job.

Who remembers these buttons? I found this one while going through some old boxes at my parents’ house. Strangely enough, Perot’s “Clean out the Barn Tour” continued long after the 1992 presidential election. After doing amazingly well for an independent, I’m sure he wanted to keep his momentum going for a possible 1996 run. He did run again in 1996, but didn’t do nearly as well the second time around.

If everyone who said “I wanted to vote Perot but didn’t because he can’t win” had voted their conscience, I believe this man would have been elected president in 1992.