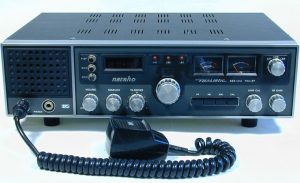 There are lots of complaints these days regarding social media. People are claiming their opinions are being censored by Big Tech. What to do? I say “Take it old school!” 45 years ago this week, I bought my first citizens band radio.

CB radio was the original social media: Facebook and Twitter, all rolled into one. As kids, we used our CB base stations to communicate without having to risk the parents eavesdropping on our phone calls. When we became old enough to drive, we put CB in our cars. It allowed us to keep in touch while we were out doing whatever it is was that teenage kids did in the early 1980s (use your imagination here!)

Did we ever get censored on CB? Of course! If someone had a more powerful station, they could “walk on you”, thus keeping your transmissions from being heard by others. But we could fight back! The remedy for that problem was to make YOUR station more powerful than the competition! A bigger antenna would usually do the trick. If not, you could wade into the underground world of linear amplification. But be warned: the FCC frowned on the latter. Uncle Charlie still did CB enforcement in those days, so one had to be careful when operating a “boot” or “footwarmer.”

We had a blast on CB. As people become disenchanted with today’s social media, it might make a comeback. I still have some of my old equipment, so I’m ready when it happens!