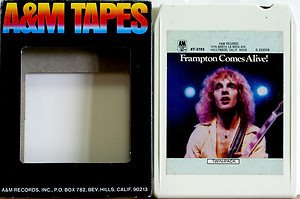 Today’s 8-track flashback is inspired by Casey Kasem and this week’s ‘American Top 40’ retro show. Peter Frampton’s “I Can’t Stand it no More” was #17 this week in 1979. Of course, his best-selling album was 1976’s 2 record live set “Frampton Comes Alive!” I bought it first on records, then 8-track tape so that I could blast it in Mom’s car. Sadly, she did not appreciate Frampton as much as I did.

Patrick J. Heaney was my 7th grade History teacher at Valley Middle School. He was a major Peter Frampton fan. This was 1976 when “Frampton Comes Alive!” was all over the radio. Some would say that I didn’t pay attention to my school teachers. This is obviously untrue: I learned from Mr. Heaney that Peter Frampton used to play with a band called Humble Pie. He could also play “Baby, I Love Your Way” on this guitar!