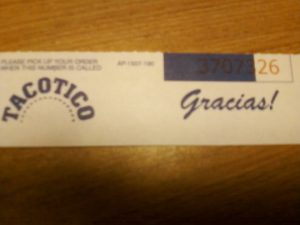 After a fun-filled 10 days in Algona, Iowa, I’m headed back out on the trail. Taking a slight detour east to Mason City to spend Labor Day weekend with my radio buddy Jared. Then, it’s time to point the car westward towards South Dakota, which hopefully will contain my pot of gold at the end of the rainbow!

Jared has previous obligations tonight and tomorrow morning, so I got myself a room at Days Inn. Looks like a nice comfortable place to spend the night. Hy-Vee is right across the street in case I need anything. What’s this familiar looking fast food restaurant next door? Could it be…is it…TACO TICO? It is! Heaven on fast food Earth!

My first Taco Tico encounter was in November, 1984 when I moved to Garden City, Kansas to work at KWKR. Being on the Underpaid Disc-Jockey Budget Plan, I was always on the lookout for cheap places to eat that served decent food. T.T. did not disappoint. Based in Wichita, Taco Tico’s were located all over Kansas. Every town of any size had one. Garden City actually had two, conveniently located on opposite sides of town. I fell in love with the place and spent a lot of money there.

In 1986, I moved to Fort Dodge, Iowa. After driving all day and checking into Super 8, I walked around to see some of my new “radio town” and find something to eat. Like a beacon guiding me in the night, there was Taco Tico! I soon learned that Iowa was also a big “Tico state” and that Phil Jaye, one of my coworkers, was also a big fan.

By the late 1990s, Taco Tico was in decline. The Hays location closed in 1998. I know this because I was working for Mix 103FM KJLS at the time. They tried to stay alive by offering 3 and then 4 hard shell tacos for $1.00. The plan didn’t work. One day, I walked by and Taco Tico was closed. A new Taco John’s had just opened a few blocks away. That finished them off. Ironically, that Taco John’s didn’t even last a year. Hays was a tough market for fast food franchises in those days.

Fast-forward to 2005. I am now living in Biloxi, Mississippi. Coming back from a day trip to the French Quarter in New Orleans, we are famished! My friend Nancy (who grew up in Iowa) casually informs me that there is a Taco Tico in Slidell. WE’RE THERE! Good timing, too. It was destroyed less than 2 months later by Hurricane Katrina and never rebuilt.

Until today, that was the last time I enjoyed a meal at “The Teek”, as my friend Eric refers to it. I just returned to my motel room after enjoying my standard order: 1 Smothered Sancho, 1 Cheese Enchilada, and 1 Beef Enchilada. Just water to drink. Delicious. I hope I don’t have to wait another 8 years for my next Tico meal!