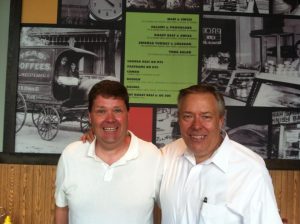 Today, I had the chance to meet up with an old radio friend from my KKEZ and KRIT Fort Dodge days. Mike Libbie and I never actually worked together. He was program director and morning host on KKEZ for several years before I arrived. One night while I was on the air, this guy shows up at the front door and says he’s there to record some commercials for Westwood Ford. Hearing his voice, it was obvious he wasn’t a groupie or worse. This was J. Michael Libbie aka the Voice of Westwood Ford! He would come in about once a month or so to cut their spots. We struck up a conversation (which is never hard to do for 2 radio guys) and became friends. Years later, we reconnected on Facebook.

This photo was taken at State Street Deli in Mason City, Iowa. One of Mike’s favorite local eateries! He happened to be in town today, so we made plans to get together. It was great seeing him and “talking shop” again. And as usual, I took an awful picture with my deer in the headlights pose.