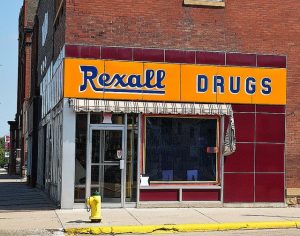 I’ve not yet arrived in the Promised Land, so I’m still in Iowa. Just barely, though. By sheer accident, I found a fantastic mom & pop motel in Rock Rapids. No, not literally by accident!

I was driving by on the highway which also happens to be Rock Rapids’ main street when the Four Seasons Motel popped out at me. It looked interesting, so I stopped to check it out and ended up staying here last night. I liked it so much that I decided to stay another night. This is the cleanest motel room I’ve ever seen. It’s also cheaper than any room in Sioux Falls with no city motel tax or occupancy fees.

Rock Rapids is a cute, clean little town. They even have a Rexall Drugs store. When was the last time you saw one of these?